Canny Food > Dining Out > Cal’s Own – Saturday Night In with the Lurgy
Him Indoors had chicken pox all last week. It’s unusual for adults to be struck with this affliction, so it was quite a surprise when I spotted the tell tale rash. He’d complained about feeling fluey the previous weekend and I’d dismissed him as a hypochondriac. Bad girlfriend!
Because of quarantine we’ve not been out and about as much and, quelle horreur, I’ve actually had to use the cooker. But Saturday was my self proclaimed night off and I decided to bring restaurant standard food to my invalid as he still wasn’t up to leaving the house. 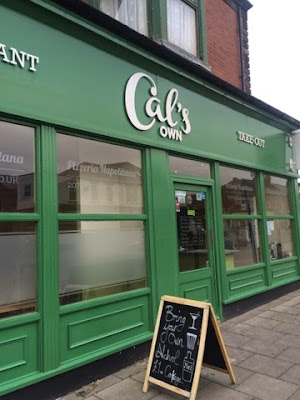 Cal’s Own is somewhere Jnr & I have eaten numerous times. We live on the other side of the Tyne so delivery isn’t an option for us, unfortunately. I had to pick Jnr up from a birthday party and was passing, so it seemed like a good opportunity to get some for Raf. He’d barely eaten through the week as his throat was sore, but miraculously his appetite returned when I mentioned Brooklyn-style pizza! 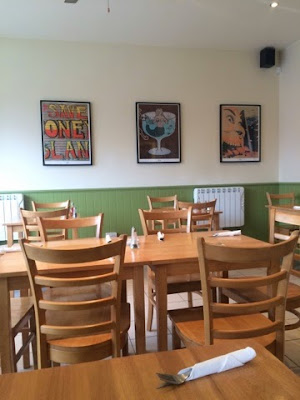 The restaurant, on Chillingham Road, caters for eat-in and takeaway. The seating area is pleasant enough and we’ve always had a chat about the food each time we’ve visited. The owner, Cal, is clearly very passionate about what they do here and about the produce. A lady stopped to watch our pizza being constructed and Cal went outside to chat with her. That’s great customer service, right there. It clearly works because the shop has a loyal fan base. 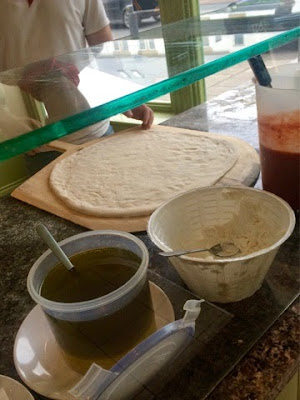 I was expecting the pizza to take a while to cook, considering we hadn’t called in advance, but altogether it was more or less 15 mins. We sat and had lemonade as we waited. I tried to drive back to Heworth as quickly (and safely!) as I could to ensure it was still warm for Raf, and thankfully managed it. Quite the trek for pizza, but completely worth it! 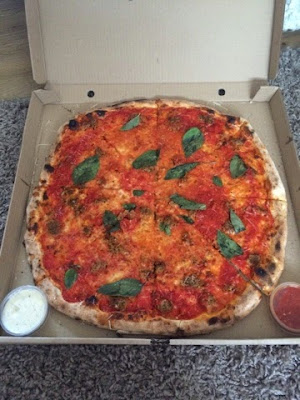 We had an 18 inch cheese pie with meatballs added. This cost us £15.50 with a garlic sauce and pepper one to dip the crusts into. The garlic one was quite pungent, and was almost relieved there was no kissing anyway due to Raf’s lurgy! There are only 5 pizza options on the menu, but Cal’s offer a range of additional toppings for you to choose from. Next time we’ll try the Italian Sausage, which sounds awesome. Check out the website for menu info and opening times.
In a world of chains and fast food Cal’s Own is heads and shoulders above the competition. A greasy Domino’s would never compare to something freshly prepared with a homemade base and sauce like this. The prices are also more than reasonable for pizza of this quality. The distance I travelled for takeaway is a testament to how good these really are, so if you haven’t already get down there ASAP!
Thanks for reading,
Pip x
Tweet
Share6
6 Shares