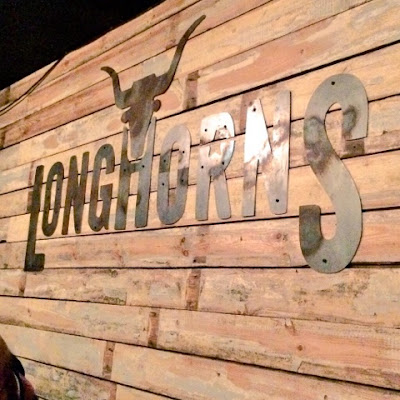 It seems there isn’t a week goes by in Newcastle without a new bar or restaurant opening. I have to admit, I’m a bit spoilt for choice! Since the start of 2015 both Him Indoors and myself agreed that we needed to be more frugal if we were to save up for holidays and the like. Because of this we devised a list of places to visit each weekend so we don’t feel deprived. It means not as many Michelin starred jaunts, and probably a bit more of me cooking. Good job I’m not too shabby in the kitchen 🙂
I had wanted to visit Longhorns from it opening back in Nov but was deterred by the fact there wasn’t a reservation system in place. Knowing how difficult getting a table has been in The Botanist, and that’s with a booking system, we’d put off going. We’d had lunch with the guys Him Indoors works with and I’d mentioned the Wing Challenge, which naturally piqued their interest, and I’d suggested rather doing the standard drinks on a Friday night we went out for food instead. I’m not hitting the vodka on our ‘sociable wets’ anymore, so for me this was a more comfortable night out with the guys.
Because it was a Friday night and there were 11 of us I worried in the absence of the booking system. What if it was super busy and we couldn’t get a table big enough for us all? Did that mean we’d have to split up the group and have different sittings for food? If we couldn’t get in where else could we try in Newcastle that a) I wanted to try and b) would not also have a similar predicament on how busy it was. I’ll confess, I sometimes don’t like organising stuff as it puts a pressure on you for events that are out of your control!
I emailed Longhorns and sent a message via Facebook to explain our quandary. They said that downstairs they had larger tables, that turnaround on food was pretty quick, and if we got there around 6pm on the Friday we might not have too long a wait to get seated. The guys were happy when I relayed this to them and we organised to meet after work to try it out.
When I arrived the queue was out of the door and I began to panic. One of the Longhorns employees told the group in front of me it was a 45 minute to an hour wait. Having texted Him Indoors and knowing he was still en route I began to worry about whether we were going to get fed! I needn’t have worried though, because three of his friends had already arrived and had bagged a large table downstairs. Crisis averted! Lesson from this- get there before 6 on a Fri, if you can. I imagine the weekends must be super busy! 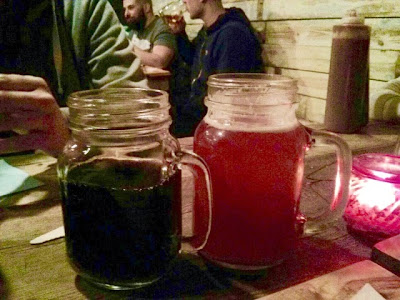 There’s nothing fancy about the decor, and you sit at large wooden communal tables. The eating utensils are what God gave you (i.e your hands!) or wooden knives and forks much like what you’d get from a chip shop. Food arrives on wooden boards, and you drink from jam jar style glasses. Food and drink are ordered from upstairs so there’s no service at the tables. Very ‘hipster’, which is reflected in the clientele. I saw more beards and plaid shirts in here than anywhere else in Newcastle! 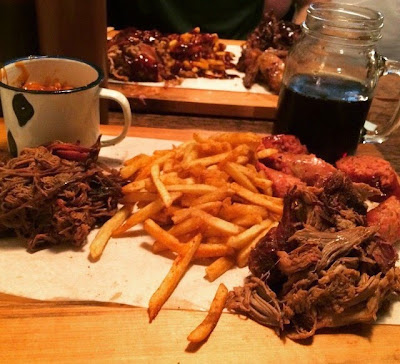 The menu for food is one page long. No-one was brave enough for Man-vs-Food style challenges, and we had the option of sandwiches, wings, ribs or a mix. For £10 you can choose 2 meats & 2 sides, or for £12 there is 3 meat & 2 sides option. I’d heard good things about the brisket, and had the chicken wings and fries. He had hog butt (not the most appetising name, to be fair!), brisket and ribs with beans and fries. The guys ordered their food and came back downstairs, and almost immediately the food followed them. Slow turnaround does not happen here!
We shared to allow those who didn’t have one thing to try other options. The hog rind was tough eating, and those who order it expecting cracking may be in for a surprise as it isn’t the same thing. Those with fillings may want to avoid! One of the guys had a Badass Brisket Bun which looked very tasty. Definitely one I’d try in the future.
There were sauces on the table, but in the darkness of the room I didn’t see the label on one which was hot sauce. Thankfully I didn’t smother my food in it or it would have been inedible for me! To my delicate palate it was too strong, but the Spaniards and Brazilians I ate with were using it with gusto. The BBQ sauce is much more appealing to me, and I feel because of the amount of meat we ate it was needed to add some moistness.
Everything was polished off, although double fries on my part were a big mistake. I definitely suffered from ‘eyes bigger than my belly’ syndrome. The fries were coated in a special seasoning which had a sweetness to it, so the tang of the BBQ sauce stopped them from being too sickly for me. The meat was really well cooked and the portion sizes were manageable. My favourite was the brisket, and in my opinion is the best in Newcastle from the recent spate of smokehouse openings.
We were ready to leave by 7:30, and as much as I wanted to sample the salted caramel brownie or the key lime pie I just didn’t have the space for them. Food baby alert! I suggested Brewdog for further drinks, which is situated not far away on Dean Street, and off we all trundled. 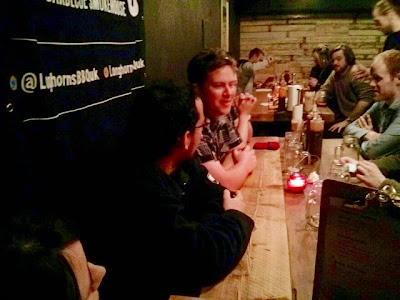 All in all, it is definitely worth a visit. It isn’t fine dining, nor does it profess to be. It reminds me of Fat Hippo in vibe, but they have waiting staff. You could feel rushed to finish because of the super fast turnaround, and it isn’t ideal if you’re seated downstairs having to go upstairs to order food and drinks. We wanted additional stuff during the course of our meal and it felt unfair that someone had to leave their food to do that. No real major complaints though, especially when it came to the bill.
Thanks for reading,
Pip x
Follow us on Twitter and Facebook for sneaky peeks and reviews 🙂
Tweet
Share
0 Shares