Canny Food > Afternoon Tea > Jnr’s Birthday – Featuring The Staith House and Jesmond Dene House
This weekend has been quite a food-orientated one, even by my standards! On Friday we celebrated my son’s 12th birthday. I asked him where he wanted to visit as a treat, and he specifically requested an Afternoon Tea at Jesmond Dene House. As it is one of my absolute favourite places in Newcastle to eat I wasn’t going to him turn down, and it afforded me the opportunity to sample their newly launched Casual Dining menu. I’d heard about this via their Facebook page, and some former patrons were less than kind about the move by the restaurant over to a moderately priced daytime menu. In fact, one suggested that this would mean a less salubrious clientele for the eatery! 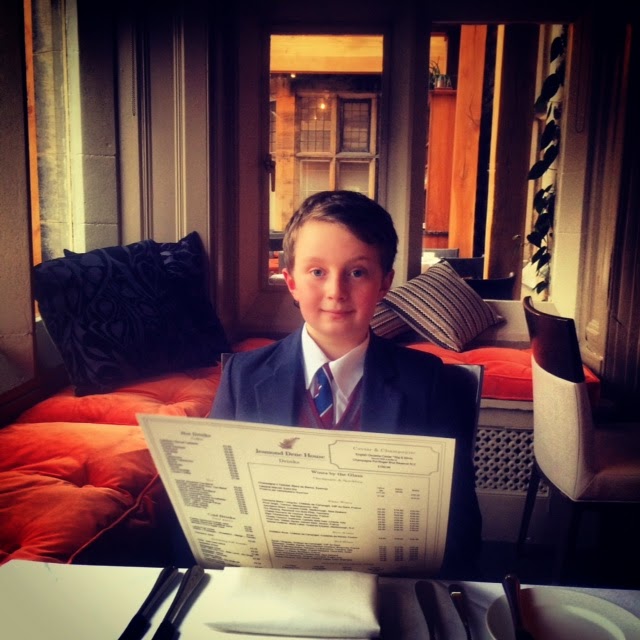 As per usual I’d already decided in advance what I was going to eat, and was pleased when we were sat in the restaurant as I hadn’t wanted to tuck into my burger while perched on a sofa! Jnr had tomato and basil soup to start, which came with lots of fresh bread for him to dunk. I had this bad boy…. 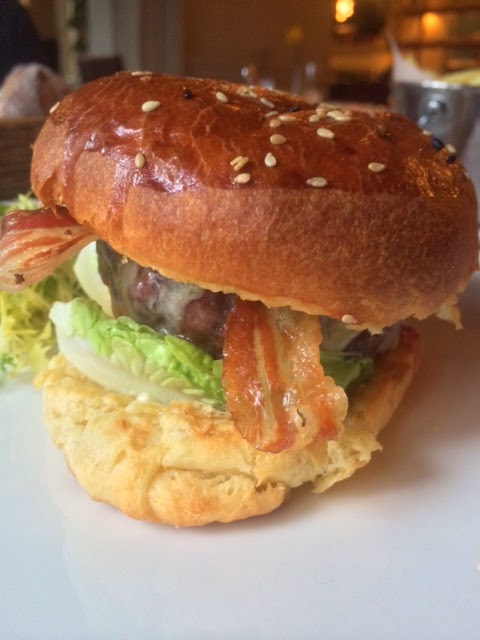 .. which was amazing! It came with a little ‘bucket’ of French Fries, which had a little too much salt on for my taste. Then again, I rarely season my food. The burger was cooked to my liking, which is medium, and I enjoyed every morsel. I usually find burgers heavy going because of the bread, but this bun was light. I definitely didn’t have space for the lovely cakes they have on offer, which was a blessing as I’d have regretted it during my boot camp session the following day. 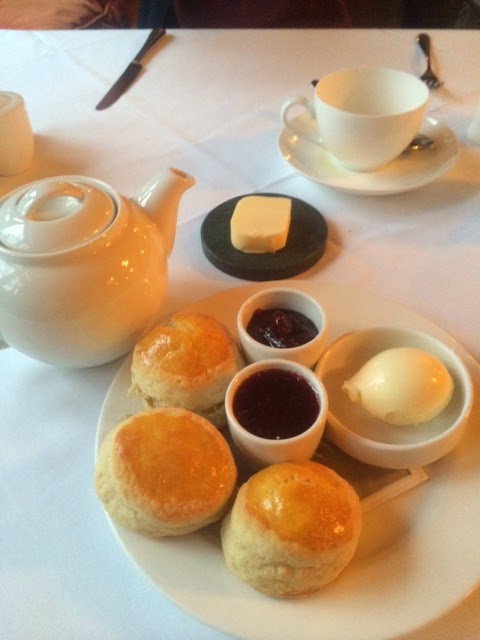 Rather than opting for the full Afternoon Tea, Jnr decided to have a Cream Tea instead. He requested plain scones as we both have an aversion to the ‘flies’ (sultanas, as you may know them as!) you find in the fruit variety. Many an Afternoon Tea has been ruined by the massacre of the dried fruit as we’ve tried to expel them! All in all it was a lovely experience. Jnr has requested we visit more frequently, and as he attends a school nearby we should probably make more of an effort to pop in after the school run. 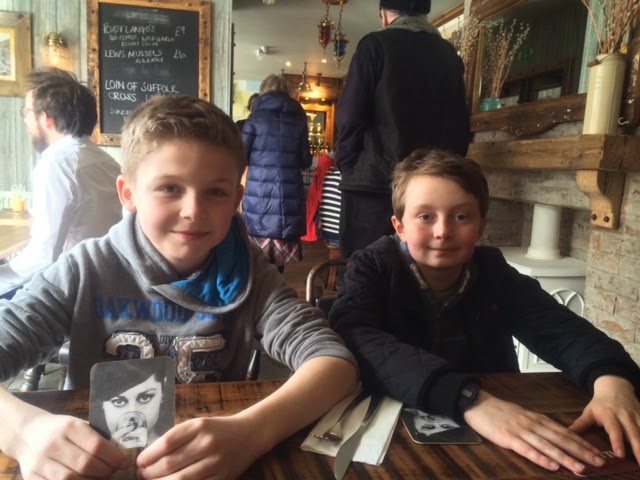 As Jnr started a new school in September, it has been hard for him to spend time with his former classmates. The birthday gave us a welcomed opportunity to make an effort to catch up with those he’s missed of late. We decided to visit Tynemouth, buoyed by the sunny weather we’ve enjoyed this week. 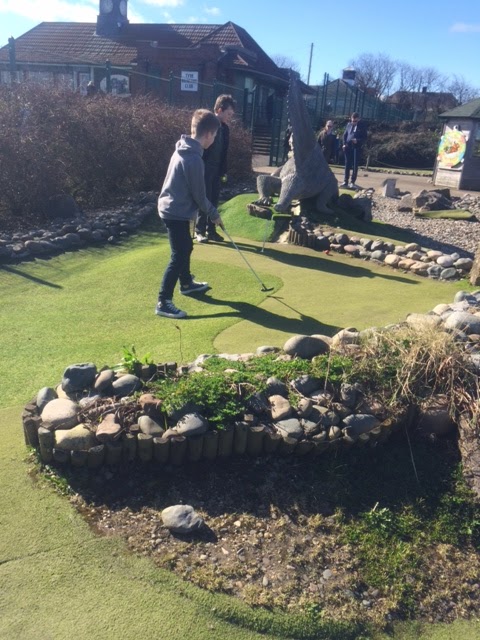 Jnr is fiercely competitive, so asked if we could have a round of Crazy Golf. This was great fun, especially as I won! It wasn’t so great having a putter clumsily swung at my face by Jnr’s friend. I’m currently sporting a nice bruise where it connected with my nose 🙁 After a walk along the sunny beach and a mooch around the market for brownies (The Sconery is a recommend, if you’re in the vicinity) we visited The Staith House for a good old fashioned Sunday lunch. 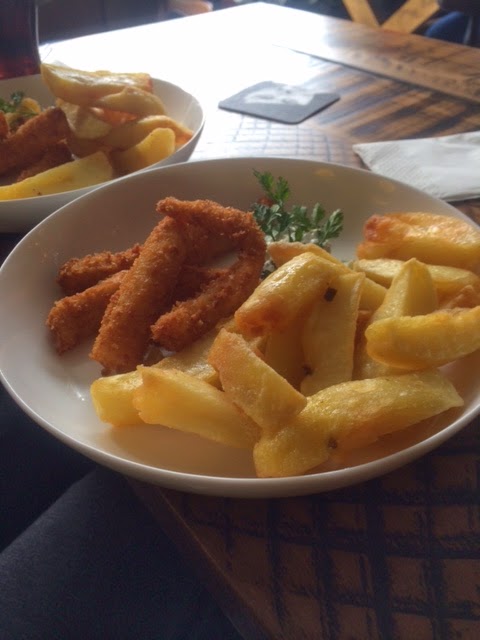 The menu is very ‘fishy’, which shouldn’t be surprising given its location on the Fish Quay. As I don’t eat fish, I’d have struggled were it not for the roasts on offer. A friend on Facebook visited an hour prior to us and had helpfully posted a picture of her lunch, so I knew I was onto a winner with the traditional Sunday fare. As the boys had eaten brownies for breakfast they weren’t keen on having anything heavy so both chose fish goujons, and I ordered chunky chips for them as a side. 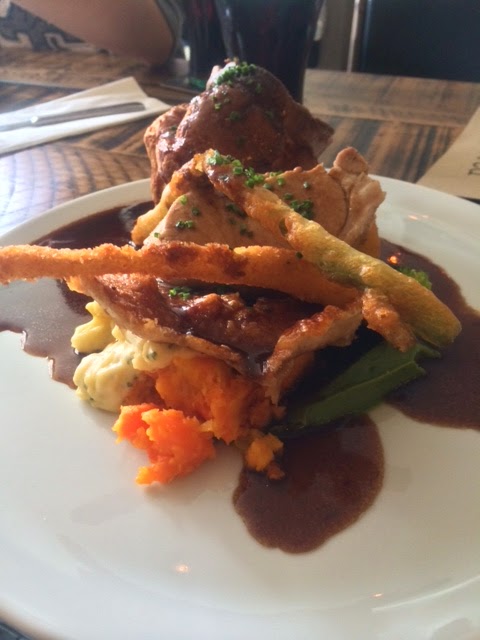 I had the roast pork (£11) for my lunch, which came with the obligatory crackling and Yorkshire pudding. I’m a Yorkie pud aficionado, and I have been known not return to an establishment if their puddings aren’t up to my own lofty standards. The Staith’s were more than a match for mine, so get a big thumbs up. Aunt Bessie’s they were not 🙂 The veg was not the standard boiled carrots and pale sprouts; there was cauliflower cheese, buttery carrot and turnip mash, a breaded parsnip and tempura runner beans. Very different and appetising. I even ate the pea puree, and I hate peas! The gravy was thick and there was enough to flavour the whole plate of food- another bugbear of mine when it comes to Sunday lunches. When did the rules change so gravy must be ‘anaemic’ and only available by the teaspoon full ?!
The ambiance was great, and the staff were really friendly. The pub has a cracking music selection, and I sat happily listening to Fleetwood Mac, David Bowie, and The Doves while we ate. The whole experience was enjoyable, and ranks alongside The Barrasford Arms as one of the best places for Sunday lunch… in my own humble opinion. I’m more than happy to sample more in my quest to beat the epic lunches my mother prepared for me in my childhood, though 🙂
Thanks for reading,
Pips x
Follow Canny Food on Facebook and Twitter for sneaky peeks at our NE food adventures.
Tweet
Share
0 Shares