Canny Food > Afternoon Tea > By the Seaside
We’re reaching the end of the holidays and I’m starting to feel like I’ve exhausted every option to keep Junior entertained and away from Minecraft! A losing battle, I must admit, but he needs ‘outside’ interaction.
I’d started following a new account on Twitter (@lettherebcrumbs) and thought I’d metaphorically kill two birds by getting him out of the house and sampling some tea and cake in a new establishment. Trips to the seaside, in a culinary sense, are usually limited to greasy fish & chips and a Minchella’s ice cream. Not very exciting, but safe for a fusspot like me. This was a delightful combination of two of my most favourite things- cake and the seaside. 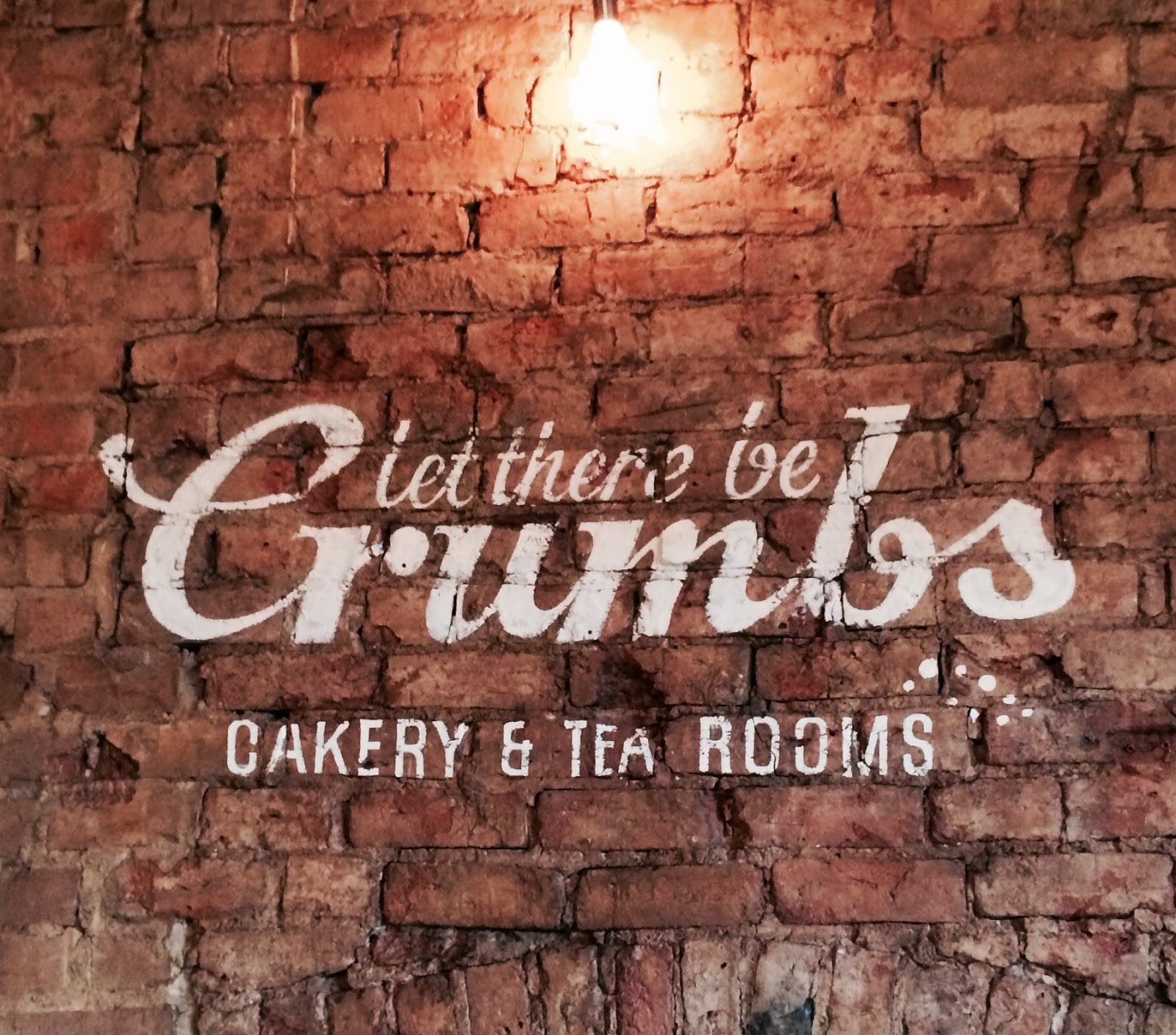 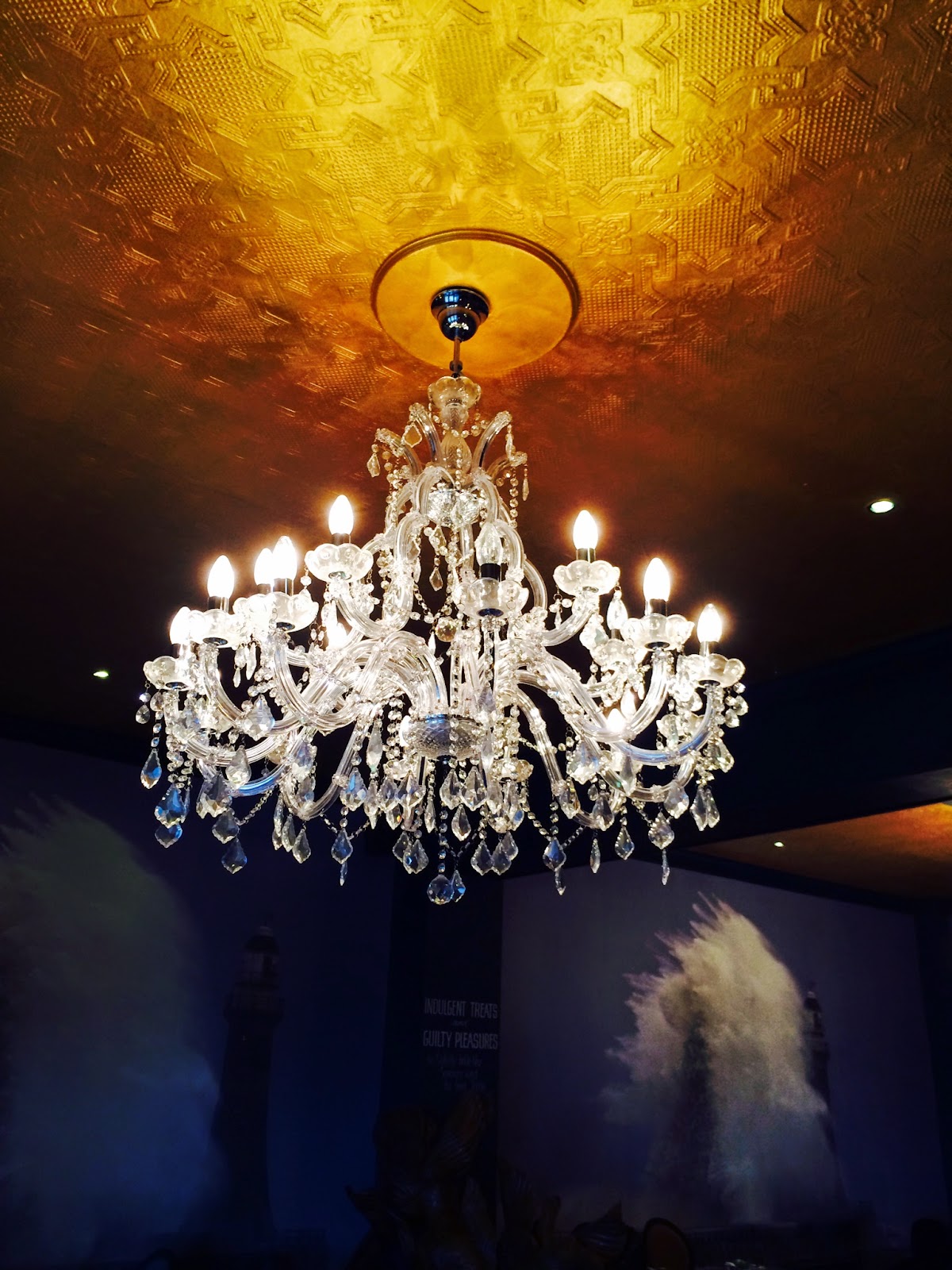 Geordies usually actively avoid visiting Sunderland, and I must admit it isn’t top of my ‘Places to Visit’ list. Checking out the Let There Be Crumbs website gave me the impetus to change my Tynemouth habit, especially as there was a mention of milkshakes. I knew Junior would be swayed when I promised him a slice of cake and a banana shake!
I wasn’t disappointed by the interior- very ‘shabby chic’- and for a Monday lunchtime the cafe was busy. I’d say if Let There Be Crumbs was located in Newcastle city centre there’d be a queue out of the door for a table. The staff were all friendly, which is a contrast to some of the establisments I’ve eaten in of late. I’m contemplating a blog on that at a later date.
The menu was fairly comprehensive for a tea room, and all the expected favourites were there. Unfortunately the picture I took of the chiller cabinet didn’t turn out as well as I hoped, but there was the traditional Victoria Sponge and Carrot Cake nestled beside newbies like Espresso Marble Cake and Mississippi Mud Pie. The waitress told us that the cakes were fresh every day, so it was worth checking the cabinet to see what was on offer.
Junior, as predicted, had a banana milkshake. He said he wasn’t in the mood for cake, and asked to have a Croque Monsieur instead. This came with a little bucket of fries and some dressed leaves, which unusually he ate. He is known for complaining he’s hungry directly after eating a meal, but even he struggled to finish his sandwich. 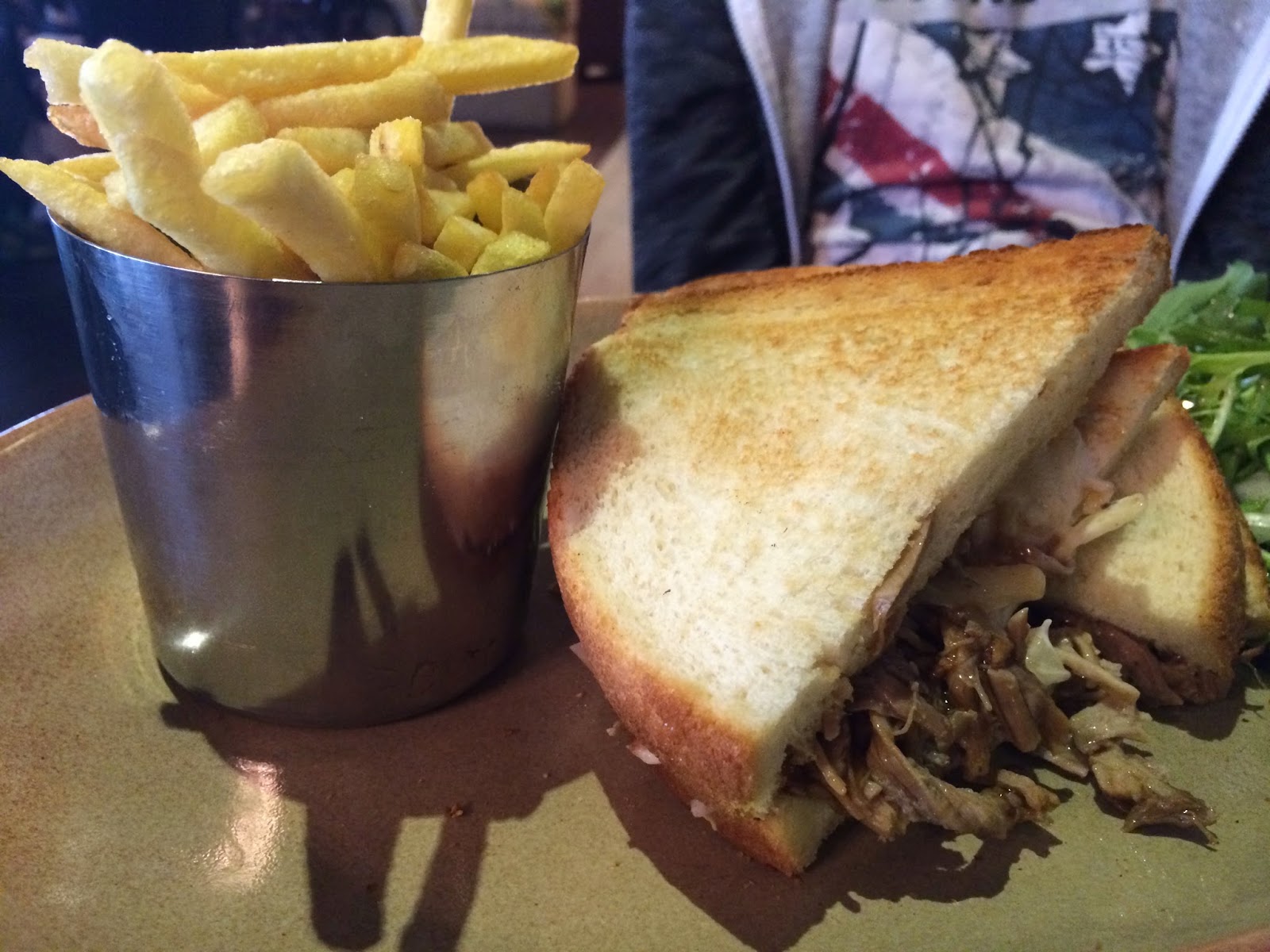 I opted for the pulled pork sandwich, which came with coleslaw. My gripes? The standard white or brown bread wasn’t ‘special’ enough for the filling. I think a brioche roll might have served the pork better. I’d have put the slaw on the side, and ensured the meat was ‘wet’ enough with the cooking juices to not need anything else. Looking at the Twitter feed their New Yorker bagel looks amazing, so I’d recommend giving that a try if you manage to visit. 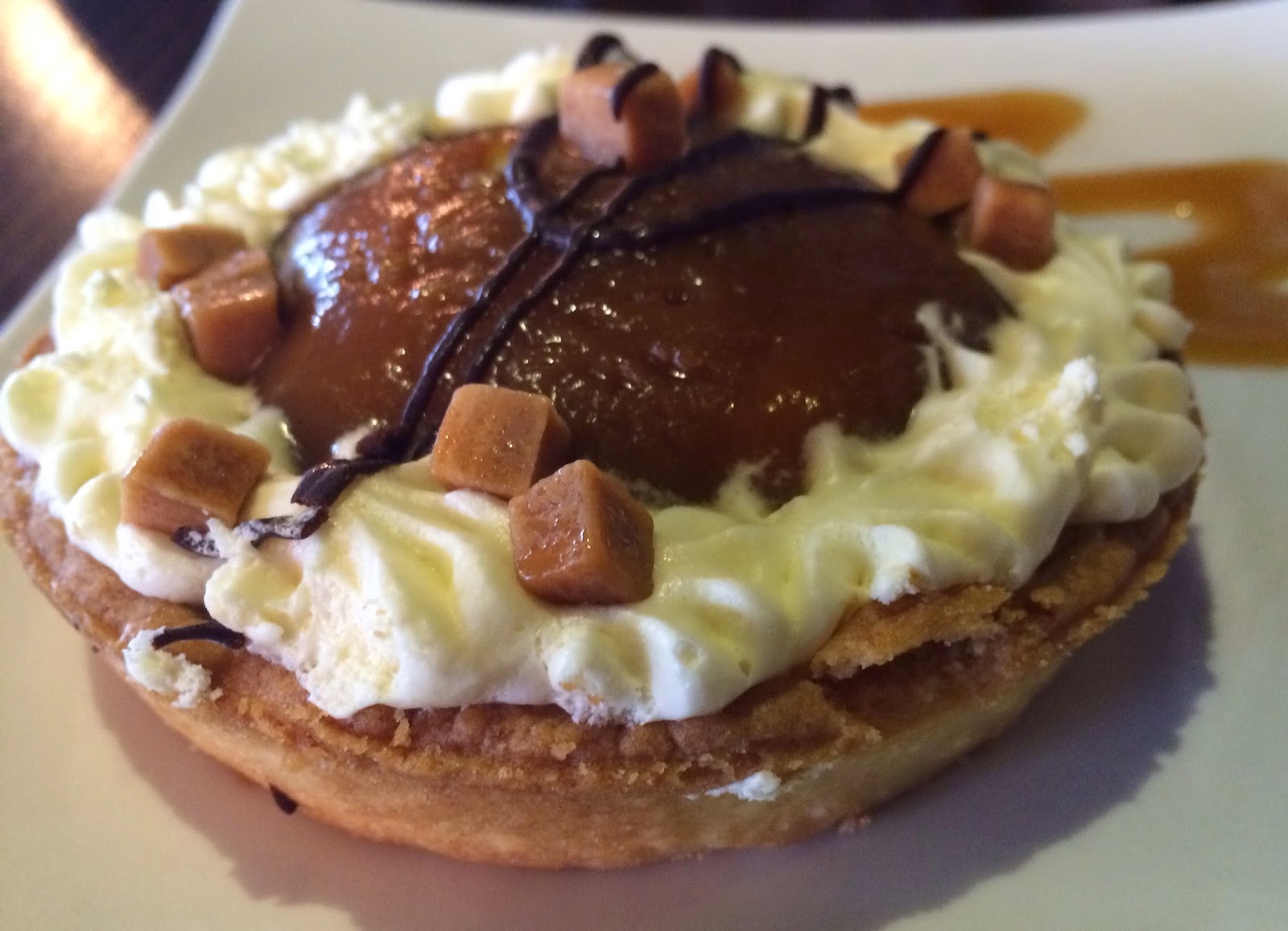 I couldn’t visit somewhere that purports to be a Cakery without having something sweet to finish my meal, so Junior and I agreed to share a Banoffee Pie. The pastry was good, and the toffee was super sweet. We really struggled to finish it after our savoury dishes, which was a shame. 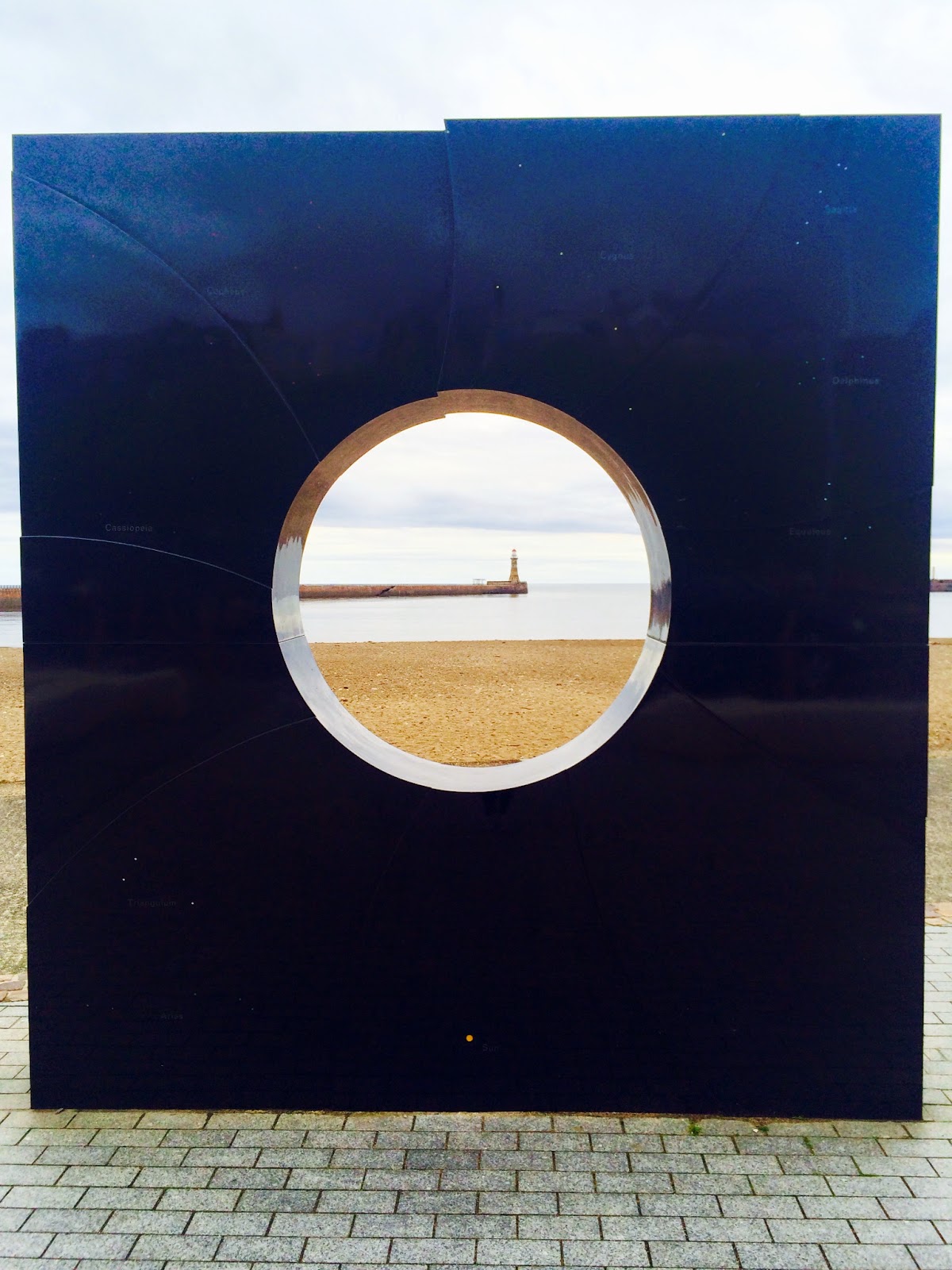 After I settled the very reasonable bill we walked along Roker seafront, which is being regenerated at present. It’s not going to rival picturesque Tynemouth in my opinion, but as Let There Be Cake offer a choice of Afternoon Teas (starting from £13.95) I might be tempted over to the ‘dark side’ again! 🙂
Thanks for reading,
Pips x
Tweet
Share
0 Shares