Canny Food > Afternoon Tea > Review – Running Fox, Felton
A few weeks ago I was fortunate enough to do an observational shift in a different service area of work, which meant I got to meet some new people. During the course of the day we talked about our respective families, our employment backgrounds, and my favourite topic: food. They asked me for recommendations of places to eat, and I mentioned about a cafe I’d recently read about on Twitter. I’d told them that based on the photos I’d seen of the Afternoon Teas it was somewhere that was on my ‘Must Visit’ list, and that as guys they might like it as the pies looked epic. This place was called Running Fox, and I showed them some of the photos in our downtime between patients.
In a weird coincidence we were dealing with a call and started to talk to the relative present to pass the time. She discussed her businesses and it transpired this lady was the owner of Running Fox. Very bizarre for us! I told her of my desire to try their Afternoon Tea and she encouraged me to visit when I had the time. 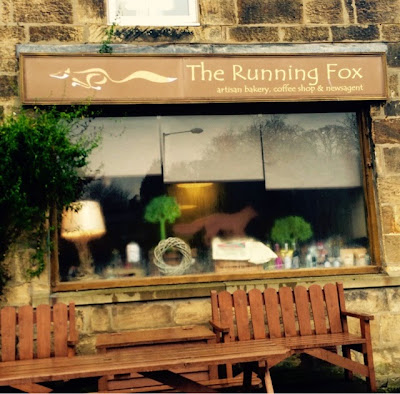 We were at a loose end today, so I suggested to Him Indoors we should go out for lunch. Having eaten a lot this weekend I wasn’t in the mood for a full-on Sunday roast, and thought Running Fox offered enough options to satisfy both of us. 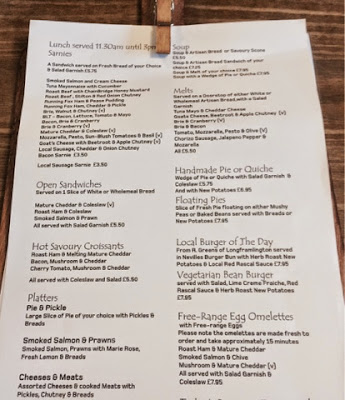 We always have a lazy Sunday when Jnr is visiting his Dad, and today was no different. The only thing that scuppered my morning was the fact we’d run out of milk, which meant I couldn’t have my morning cuppa. I was in a desperate rush to get to the cafe so I could have my fix! The one thing I didn’t check before leaving was when the Afternoon Tea was served, and it transpired we were two hours early for it 🙁 Having travelled so far to visit we decided to stick around, and each opted for a pie platter. He had the steak & ale options, whereas I chose the corned beef. I have fond memories of my Mum making a pie for Sunday Afternoon Tea, and she would always serve the cakes on a proper stand. 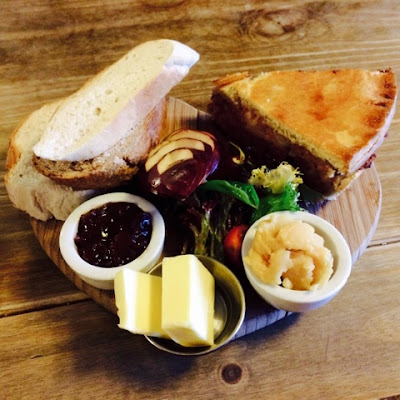 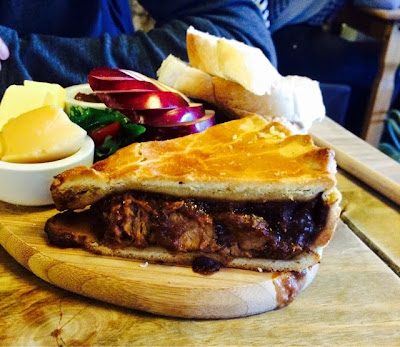 The pie platter comes with pickle, pease pudding, apple, and three slices of bread. We had it with a pot of tea, which is unusual for me as I don’t normally drink something hot alongside food. I was dying for my cuppa though! I’m not a fan of pease pudding, which probably means I’m going to lose my Geordie credentials! It was the first time Him Indoors tried it, and I don’t think he’ll be too bothered it doesn’t make it onto my shopping list. 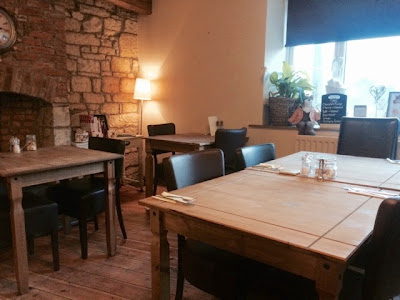 The pie was amazing and we both really enjoyed it. The portion size was just about right for us, too. It was hard not to be jealous of the delicious looking burgers and sandwiches that other diners were eating around us. The lady who served us was lovely and attentive, and I found all the staff were chatty and friendly. Someone was celebrating a birthday at the table beside us and their cake came out with a candle on top; a gesture I thought set Running Fox apart from other cafes I have visited over the years. We felt welcomed and comfortable, even though they were busy. 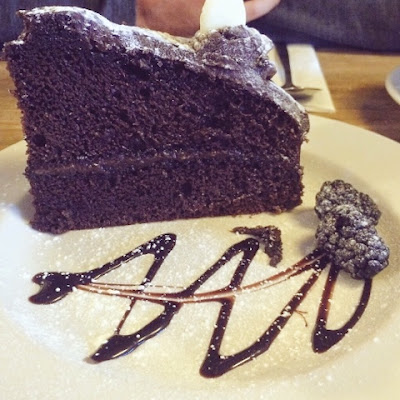 We decided to share a slice of chocolate fudge cake, and bought some Red Velvet cake to take home for Jnr. I’m not a big fan of chocolate cake, even though I love chocolate, and was concerned this might be too rich for me. This cake was just right though, and I even ate the blackberries. A dash of cream might have been a nice addition, but neither of us asked.
I was disappointed not to get to experience their Afternoon Tea, so as we left we booked in to return Valentines Weekend. Can’t wait to return! If a trip up to Felton is a trek just for cake or pie I can recommend tying it in with a trip to Warkworth Castle, which is in the area. I advise making a reservation at Running Fox ahead of visiting, just in case it is super busy. I think the weather deterred some people from heading out today as it was snowy on the way up, and were told we were lucky to be able to walk in for a table today.
Thanks for reading,
Pip x
Tweet
Share
0 Shares