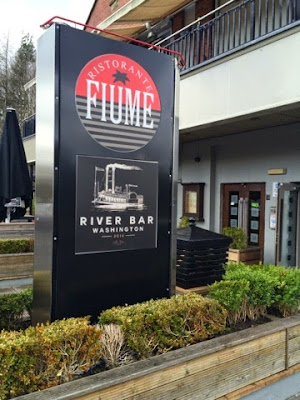 It’s probably been over a decade since my last trip to the site that houses River Bar. Its neighbour, Italian restaurant Fiume, is a Washington institution. I doubt there’s anyone in the area who hasn’t eaten their once famous Chicken Kiev. I was informed during #washingtonhour on Twitter that there had been a refurbishment so decided to pay a visit. 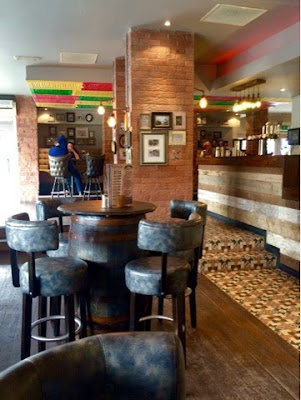 We couldn’t get a table in Fiume as it was booked for a function so instead tried out the bar downstairs. I can’t recall what it may have been in its previous incarnation so won’t comment whether there’s been an improvement since the update. In the River Bar there are very limited comfortable seating options, in my opinion. There’s only 3 suitable tables to dine at, and the other seating comprises of barrels and stools. On our visit all of the tables were already occupied which meant I had to perch at a high table. This may be OK for drinks, but I like to feel comfortable eating and this was certainly not. I had tried to reserve a table in advance by telephoning, but was told they don’t accept bookings. 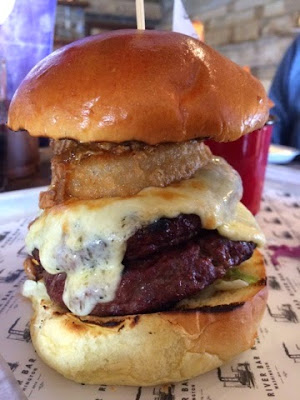 The menu was American in influence: burgers, hot dogs, waffles and pancakes. It all seemed interesting enough, and reasonably priced to boot. I decided to have their River Bar Burger, while my friend chose the Ultimate Cheese Dog. 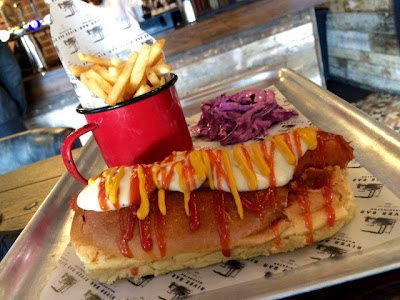 I placed the order at the bar and waited. It became extremely busy as the party for upstairs congregated here first. It looked like the photos I’d seen of Ladies Day at Aintree; all big hair and skyscraper heels. I thought it was a bit OTT for a Sunday afternoon in Washington, but what do I know? I felt under dressed in my jeans and hoodie! 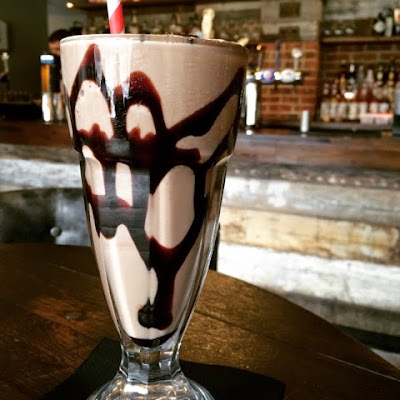 So, onto the food. Because there were only 3 staff and a sudden run at the bar we waited a while for it to arrive. Presentation-wise it was reminiscent of Lane 7, although the burger didn’t quite match their lofty standards. The patty was thick, but unfortunately wasn’t juicy. The smoked bacon which topped it was unnoticeable, which is a shame, and the onion ring disintegrated into nothing amongst the other fillings. The lettuce and tomato were hidden underneath the burger and eventually made the bottom of the bun soggy. It was too much dry meat for me to handle in one sitting, so had to leave some.
My friend’s Hot Dog looked and tasted good. The bun was on the disappointing side, but we often find this in eateries. I wasn’t sure at first about the red cabbage slaw dolloped on our trays, but it wasn’t an unpleasant eat. The regular fries were nice, but the sweet potato ones were the highlight for me. I often find them limp, but these were crispy and coated in a tasty seasoning. The chocolate milkshake to finish was of a good standard for the £3 we paid.
We left River Bar after our food as I didn’t feel it was cosy enough to sit in on a Sunday afternoon with a glass of wine. It reminded me a little of a Wetherspoons, if I’m being brutally honest. The food was decent for the price, but didn’t think the venue had a lot of atmosphere. Those with kids I feel will struggle as there’s nothing particularly engaging for them – the screens in the bar featured advertisements for forthcoming events, not TV or cartoons. The seating is also less than accommodating if you can’t reserve a booth table. It’s a shame when so much money has been spent on the refurb, but feel perhaps we’re not the market they’re aiming for. We may pop in for a quick bite to eat if we’re in the area again.
Thanks for reading,
Pip x
Tweet
Share
0 Shares